So in the video demonstration that follows this post, you’ll see a user attempting to login against an Authentication Chain (say ‘MyAuthChain’) which has three module instances namely (i) Data Store, (ii) Adaptive Risk and (iii) HOTP. If the user is able to supply the right credentials against the Data Store, he or she is allowed in without any further challenge. On the other hand, if the the attempt to authenticate against the first Module instance (Data Store) fails, then the user is prompted for additional credentials like One Time Password.

The following illustration might give a rough idea on the what’s discussed above and the video that follows might make it pretty clear.

I’m back after a late summer break spent across France.

Now it’s back to business full speed, to finish and deliver new major releases of our products by the end of the year.

I will also be traveling and attending a few events. The closer will be “Les Assises de la Sécurité” in Monaco, at the end of the month. If you’re attending the event, drop me a note. I’ll be happy to meet with you and discuss our products and solutions.

Cut to present, we have OpenIG acting as a resource server. So in the video log, you’ll see the curl command being used to contact OpenAM to get an Access Token, use the same command to contact OpenIG with the Access Token, which is when OpenIG (acting as a resource server), will contact OpenAM (acting as an authorization server) for validating the token. Once validated, OpenIG will apply additional filters to post the credentials to a HTTP Server and get the user profile in response to it.A one-liner definition for the mouthful of jargon I used above can be found here. The illustration below might make the long story said above slightly shorter. 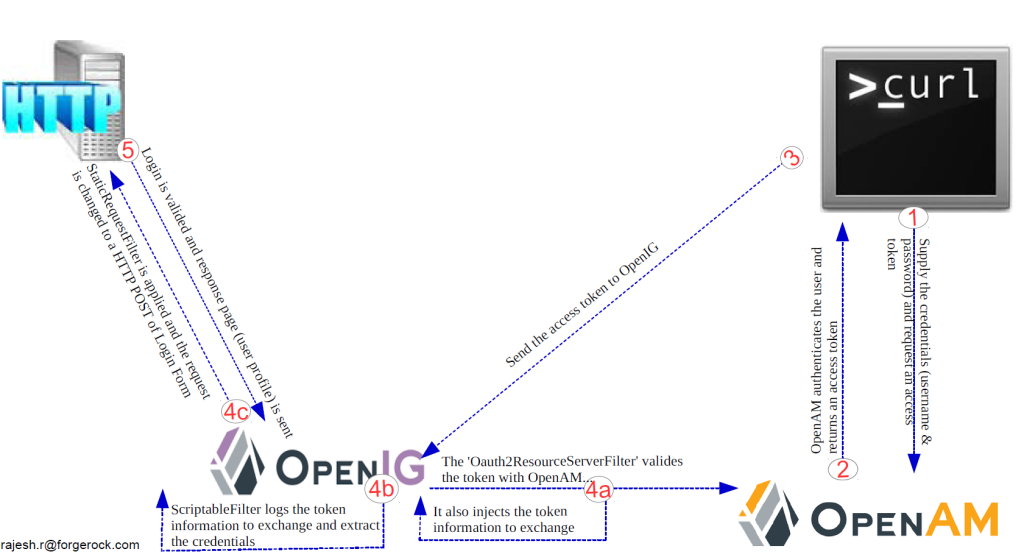